Celebrating Neurodiversity at the NMC Library

The Curious Incident of the Dog in the Night-Time by Mark Haddon
A bestselling modern classic—both poignant and funny—about a boy with autism who sets out to solve the murder of a neighbor’s dog and discovers unexpected truths about himself and the world.

Extremely Loud & Incredibly Close by Jonathan Safran Foer
Nine-year-old Oskar Schell has embarked on an urgent, secret mission that will take him through the five boroughs of New York. His goal is to find the lock that matches a mysterious key that belonged to his father, who died in the World Trade Center on the morning of September 11. This seemingly impossible task will bring Oskar into contact with survivors of all sorts on an exhilarating, affecting, often hilarious, and ultimately healing journey.

Convenience Store Woman by Ginny Tapley Takemori
A brilliant depiction of an unusual psyche and a world hidden from view, Convenience Store Woman is an ironic and sharp-eyed look at contemporary work culture and the pressures to conform, as well as a charming and completely fresh portrait of an unforgettable heroine.

Forrest Gump by Winston Groom
Six foot six, 242 pounds, and possessed of an IQ of 70, Forrest Gump is the lovable, surprisingly savvy hero of this classic comic tale. His early life may seem inauspicious, but when the University of Alabama’s football team drafts Forrest and makes him a star, it sets him on an unbelievable path that will transform him from Vietnam hero to world-class Ping-Pong player, from wrestler to entrepreneur. With a voice all his own, Forrest is telling all in a madcap romp through three decades of American history.

Going Bovine by Libba Bray
In an attempt to find a cure after being diagnosed with Creutzfeldt-Jakob’s (aka mad cow) disease, Cameron Smith, a disaffected sixteen-year-old boy, sets off on a road trip with a death-obsessed video gaming dwarf he meets in the hospital.

Al Capone Does My Shirts by Gennifer Choldenko
A twelve-year-old boy named Moose moves to Alcatraz Island in 1935 when guards’ families were housed there, and has to contend with his extraordinary new environment in addition to life with his autistic sister. Newbery Honor Book – 2005

NeuroTribes: the legacy of autism and the future of neurodiversity by Steve Silberman
“A groundbreaking book that upends conventional thinking about autism and suggests a broader model for acceptance, understanding, and full participation in society for people who think differently”

The Neurodiverse Classroom: a teacher’s guide to specific learning difficulties and meeting individual student needs by Victoria Honeybourne
An essential guide for teachers wishing to create inclusive and successful learning environments in diverse classrooms. Focusing on promoting acceptance and self-esteem of each child rather than on labeling their difficulties, it shows how to make good use of simple resources and meet a wide range of needs, including children with ADHD, autism, OCD, dyslexia and special speech and language needs.

The Spectrum Girl’s Survival Guide: how to grow up awesome and autistic by Siena Castellon
All the advice and tools you’ll need to help you flourish and achieve what you want in life. From the answers to everyday questions such as ‘Am I using appropriate body language?’ and ‘Did I say the wrong thing?’, through understanding the importance of your emotions, looking after your physical and mental health and coping with anxiety and sensory overloads, award-winning neurodiversity campaigner, Castellon uses her own experiences to provide you with the skills to overcome any challenge.

Nobody’s Normal: how culture created the stigma of mental illness by Roy Richard Grinker
An examination of evolving attitudes toward mental illness throughout history and the fight to end the stigma. For centuries, scientists and society cast moral judgments on anyone deemed mentally ill, confining many to asylums. Grinker chronicles the progress and setbacks in the struggle against mental-illness stigma-from the eighteenth century, through America’s major wars, and into today’s high-tech economy and offers a path to end the shadow of stigma.

Sincerely, Your Autistic Child: what people on the autism spectrum wish their parents knew about growing up, acceptance, and identity by Virginia Johnson
From childhood and education to culture, gender identity, and sexuality, this anthology tackles the everyday joys and challenges of growing up while addressing the emotional needs, sensitivity, and vibrancy of autistic kids, youth, and young adults. Contributors reflect on what they have learned while growing up on the autism spectrum and how parents can avoid common mistakes and overcome challenges while raising their child.

Teaching University Students with Autism Spectrum Disorder : A Guide to Developing Academic Capacity and Proficiency by Kim Draisma and Kimberely McMahon-Coleman
Based on the findings of a five year longitudinal study into the experiences of students with Autism Spectrum Disorder (ASD), this book provides tertiary educators and support staff with practical support for addressing the challenges associated with ASD
as they manifest in college and university environments.

Neurodiversity in the Classroom: strength-based strategies to help students with special needs succeed in school and life by Thomas Armstrong
A new concept on human diversity has emerged over the past 10 years that promises to revolutionize the way educators provide services to students with special needs: neurodiversity. Just as we celebrate diversity in nature and cultures, so too do we need to honor the diversity of brains among our students who learn, think, and behave differently.

Explore movies in Kanopy for free. Go to nmc.kanopy.com and login using your NMC ID and password.

Neurotypical – A Film About Individuals on the Autism Spectrum
Four-year-old Violet, teenaged Nicholas and adult Paula occupy different positions on the autism spectrum, but they are all at pivotal moments in their lives. How they and the people around them work out their perceptual and behavioral differences becomes a remarkable reflection of the “neurotypical” world — the world of the non-autistic — revealing inventive adaptations on each side and an emerging critique of both what it means to be normal and what it means to be human.

The Reason I Jump
Based on the best-selling book by Naoki Higashida, The Reason I Jump is an immersive cinematic exploration of neurodiversity through the experiences of non-speaking autistic people from around the world. The film blends Higashida’s revelatory insights into autism, written when he was just 13, with intimate portraits of five remarkable young people. It opens a window for audiences into an intense and overwhelming, but often joyful, sensory universe.

Autism Goes to College
Five students on the autism spectrum — Guillermo, Jasmine, Caroline, Jonathan, and Aniella — invite viewers into their dorms and classrooms to show the world how they make college work for them. They share their dreams, fears, failures, and successes with candid insights and humor.

Mr. Hublot
Mr. Hublot is a withdrawn, idiosyncratic character with OCD, scared of change and the outside world. But when a very invasive companion, Robot Pet, arrives in his home, Mr.Hublot’s world is turned upside down. Winner of Best Short Film, Animated at the Academy Awards.

BEYOND THE LIBRARY: PODCASTS 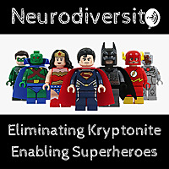 The Neurodiversity Podcast talks with leaders in the fields of psychology, education, and beyond, about positively impacting neurodivergent people. Our goal is to reframe differences that were once considered disabilities or disorders, promote awareness of this unique population, and improve the lives of neurodivergent and high-ability people. 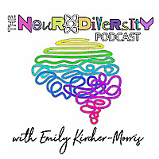 In Neurodiversity: Eliminating Kryptonite Enabling Heroes, you will hear from: The Rainmakers: Those people and organizations making the difference! The Advocates: Those people who are supporting Neurodiversity at Work. The Superheroes: Those leaders are Neurodifferent and proud. This podcast will be the game changer we are all after. 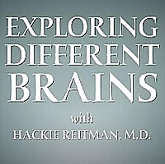 Exploring Different Brains is a weekly interview show hosted by neurodiversity advocate Harold Hackie Reitman, MD., and presented by DifferentBrains.com. Join us as we speak with some of the most interesting people involved in autism, Asperger’s, dyslexia, ADHD, OCD, down syndrome, and any condition that can be considered neurodiverse.