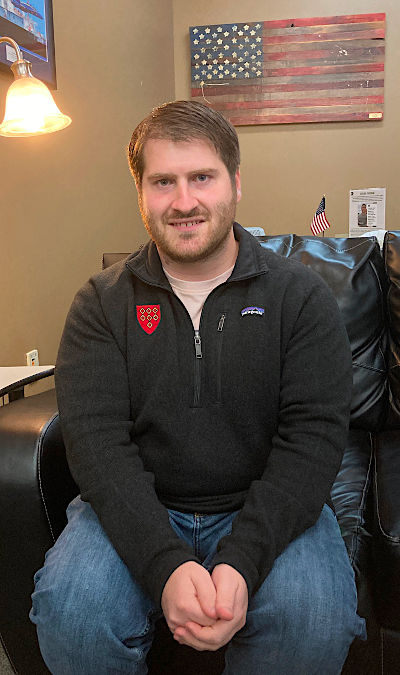 As a first-generation college student attending NMC, Alex Walsh had a lot of company. As an NMC graduate, he became one of a rarified few who transfer to an Ivy League college.

Now, with his 2022 Harvard University diploma adorning the wall of Walsh’s office in NMC’s Student Success Center, he’s eager to help more students complete paths like his, taking advantage of NMC to make a degree both more affordable and achievable.

“I want to help fellow community college students,” said Walsh, right, a college completion coach. He joined the Success Center staff in June through NMC’s partnership with the Michigan College Access Network (MCAN), and specializes in working with first-generation students from Antrim and Kalkaska counties.

Specifically, MCAN is aimed at achieving Michigan’s goal that 60 percent of residents have a post-secondary degree by 2030. Reaching more first-generation students like Walsh, 30, is key to that.

“The heart of MCAN is all about increasing access to higher education,” said Walsh, who graduated from NMC in 2012 and then enlisted in the Navy before starting at Harvard in 2019. “I saw it as a really good opportunity to come back to NMC. I’m definitely happy to be here.”

This is NMC’s second year as part of the MCAN coaching network. Walsh’s position is funded through AmeriCorps. In its first year, the program exceeded all its goals, notably the number of students who persisted in their educational journey or completed it.

“Partnering with the state to receive some of the funding for this position has allowed us to have our first full-time coaches on campus. They work as an integral part of our coaching team,” said Sally Smarsty, NMC’s Student Success Coordinator.

“We have valued NMC’s investment in the partnership and were excited to award a second coaching position at NMC,” said Trisha Caldwell, AmeriCorps program director for MCAN. “NMC has created a welcoming environment where coaches have felt welcomed and valued at the college; ultimately, providing opportunity for strong collaborative efforts to support students as they navigate their college journey.

Coaches help students develop a support network, an academic plan, a financial plan, and time management skills. They are a newer part of the support service network NMC offers to all students, in addition to instructors, advisors and tutors.

As living proof transferring can be done, Walsh plans to encourage students to aim high while they’re at it. Seeking to diversify their student bodies, some historically elite colleges are now offering generous financial aid to students from community college or first generation backgrounds, Walsh said. The University of Michigan’s Go Blue Guarantee, for instance, offers free tuition to students whose families earn $65,000 or less. Harvard’s income threshold is $75,000 and Princeton’s is $100,000.

As a veteran Walsh also aims to work with fellow coach Bob Hammond to reinvigorate services to veterans, as well as NMC’s chapter of Student Veterans of America.

Walsh’s own academic journey isn’t done, either. While serving as a coach he plans to take both the LSAT and GRE exams as he considers law school or graduate school.