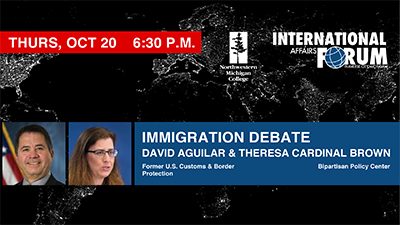 Northwestern Michigan College’s International Affairs Forum continues Thursday, October 20 at 6:30 p.m. in the Milliken Auditorium at the Dennos Museum Center. The event starts with a reception at 5:30 p.m. with wine & light appetizers.

IAF will host an immigration Debate with David Aguilar, former acting commissioner of U.S. Customs and Border Protection, and Theresa Cardinal Brown, managing director of immigration and cross-border policy at the Bipartisan Policy Center. The debate will center on immigration reform with a focus on solutions.

David Aguilar had a distinguished 35-year career in federal law enforcement, having previously led U.S. Customs and Border Protection (CBP), the country’s largest law enforcement organization. Previously, he was appointed by President George W. Bush as the National Chief of the United States Border Patrol. As the Acting Commissioner of CBP, he oversaw a workforce of 60,000 agents, officers, and other personnel and a budget of more than 11 billion dollars. He is currently a principal at Global Security Innovative Strategies based in Washington, D.C.

Theresa Cardinal Brown was director of immigration and border policy at the U.S. Chamber of Commerce, and associate director of business immigration advocacy at the American Immigration Lawyers Association. She was a policy advisor in the office of the commissioner of U.S. Customs and Border Protection. In 2005 and 2006, she became a member and later director of the Immigration Legislation Task Force in the Department of Homeland Security (DHS) Office of Policy. She then served as the first DHS director of Canadian affairs, and subsequently as the first DHS attaché at the U.S. Embassy in Ottawa. Brown has spoken on Fox News, NPR Morning Edition, PBS NewsHour, CNN International, and BBC World. She has been quoted in major print publications including Time Magazine, The Washington Post, The New York Times, USA Today, the Wall St. Journal, Newsweek and others.

The moderator will be Major General Michael Lehnert, USMC (ret.), co-chair of the IAF Advisory Board. During his 37-year career in the U.S Marine Corps, MajGen Lehnert ran Cuban and Haitian migrant camps in Guantanamo Bay, Cuba in 1995. He commanded USMC bases on or near the U.S. / Mexico border, and he served for two years as the senior advisor to the Commissioner for Customs and Border Protection.

For this hybrid event, Aguilar will be in person at Milliken Auditorium while Brown will speak remotely. This in person event will be available to livestream.

Current students and educators receive free in-person admission; registration is required with a suggested donation of $10.

All IAF regular season events are open to the public. In-person admission is $15 per person. Tickets are required and available for purchase online or at the door. For in-person tickets, livestream registration, and all event details, visit TCIAF.com.

Want to support the International Affairs Forum as a member? Learn more here.