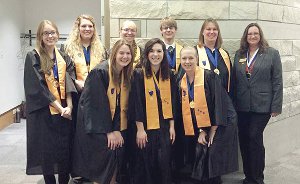 Two years ago, Alan Holcombe was sitting in his cubicle in a Grand Rapids bank, second-guessing his choice of a finance degree. Next week he’s headed to an industry conference in Maryland, all expenses paid, to see just how far his engineering technology degree from NMC will take him.

Brian Sweeney’s educational resume includes degrees from West Point and Cornell. Now the Army retiree has come full circle to teach at NMC, where he took his first class as dual-enrolled student, building one of the college’s newest programs, photonics.

The trio have each received recent scholarships that collectively showcase not only the breadth of Northwestern Michigan College offerings, from transfer to technical, but the excellence across the board.

Tahtinen, 38, (pictured above, back row, second from right) has been named the New Century Scholar for Michigan, among just 57 outstanding community college students chosen from 1,700 nominated internationally. She’s a member of Phi Theta Kappa, the international community college honor society, and will graduate in May with three associate degrees. The scholarship will help the single mother of two high school students – one of whom shares her classes as a dual-enrolled high school student – continue pursuing a bachelor’s degree.

The Harvard extension opportunity would allow her to earn a degree while taking classes mostly online. Her NMC transcripts qualify her to take three pre-admission online classes, which would in turn determine whether she could apply for official admission.

“Having that confidence to even make the phone call to Harvard was definitely something new,” she said. “When you put a challenge in front of me, I’m going to find a way. It’s just my personality.”

Holcombe, 28, and fellow student John Lutchko both received scholarships from the Hydrographic Society of America. Engineering Technology didn’t exist at NMC when Holcombe graduated from Suttons Bay High School in 2005, and he went on to earn a bachelor’s in finance and economics from a four-year school.

Cubicle life didn’t agree with him, however, and Holcombe decided to look for something where he could use his hands. In NMC’s program, he uses them to build, program and operate robots that collect data underwater. Last summer he spent an internship with the National Park Service on Lake Superior. (At leftAbove, Holcombe operates a multi-beam sonar system on the lake.)

“It’s mind-blowing to me that this was in our back yard,” Holcomb said. “My office turned from a cubicle to going out on a boat and seeing things like bald eagles and even bear cubs on the beach every day.”

The employment odds have turned in his favor, and he expects to be able to field multiple job offers after he graduates this spring.

Sweeney, meanwhile, will oversee a $15,000 grant from the National Center for Optics and Photonics Education (OP-TEC) for both scholarships and student recruitment. Photonics involves the use of lasers and other electro-optical devices in fields like manufacturing, medicine, aerospace, IT and defense. NMC was one of just four schools nationwide to receive the funding. Sweeney, 50, says the hands-on training provided is the reason why.

“West Point and Cornell had a lot of theory. We didn’t have a lot of grabbing the wrench and turning it,” Sweeney said.

Photonics started at NMC in 2012 and this is the second year the college has received the OP-TEC grant.

“These achievements illustrate the extraordinary breadth and depth of programming at NMC,” said Stephen Siciliano, NMC’s vice president for educational services. “From providing degree paths to having programs that are first in the nation and linked to our own bachelor degree shows both how broad our offerings are and the depth of scientific research that is often only associated with research universities. But one finds it here at NMC.” 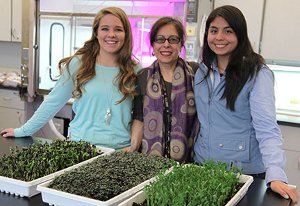 How do you get girls interested in STEM (Science, Technology, Engineering and Math) fields?

Consider showing them some stems.

Real, live, green ones, that is, with leaves growing. Put the girls — young women, really — in charge, from planting the microgreens to tending them to monitoring them. Charge them with running experiments and collecting data, like whether the greens grow better under fluorescent lights or LED lights, and whether plain water or fish tank water is more nourishing. Let them harvest, and judge which kind tastes best.

That’s what intern Karla Vega and student Taylor West did this semester in a lab on NMC’s Great Lakes campus. The pair forged a research partnership that not only bridged language and cultural barriers but helps lay the groundwork for sustainable, indoor agriculture that could eventually improve the diets of millions.

“To get girls engaged in science we need to let them make decisions, give them room to make mistakes and try things out on their own,” said NMC Water Studies Institute Education and Outreach Coordinator Constanza Hazelwood, who supervised Vega and West’s research this semester.

Vega is a Bolivian student at EARTH University in Costa Rica, a leading institution in agricultural sciences and sustainable development. Hazelwood has cultivated connections at EARTH since 2009 and was looking to take the hydroponic vertical agriculture project she started a year ago to the next level. Enter Vega on a semester-long internship.

The challenge of the vertical agriculture project bonded Vega, 20, who studies agronomy and natural resources management in Costa Rica, and West, 21, whose science interest was piqued in a high school agriscience program.

“People say, ‘why agriculture when you are from a city?’” said Vega, whose home city, Cochabamba, is home to almost 2 million people. “It was a challenge. This project can be used inside cities, where they don’t have space to grow crops.”

“That’s what women like, is a challenge,” said West.

The challenge will continue next semester, when West will visit Vega at EARTH, joining Hazelwood’s fifth study abroad trip to Costa Rica.

“The tables are going to be turned,” said West, who said her Spanish skills are negligible but expressed no concern about immersing herself in the language.

Hazelwood, too, has no doubts both students will continue to flourish. She notes that the pair made the greatest gains after the male student who originally supervised the vertical agriculture project left.

“They believe in themselves. They’re very self-confident,” she said. “It is about believing in them, at times it is getting out of their way, but always being available to support them.” 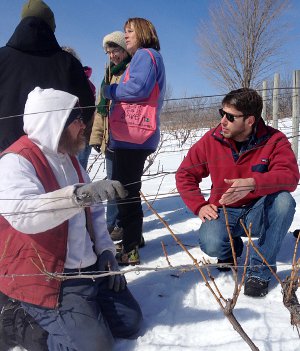 Like a grapevine twining up a trellis, NMC’s collaborative viticulture program is growing tendrils of its own and is poised for a growth spurt this summer.

Two students in the five-year-old program are breaking new terroir with their summer internships. Kurtis Berry (right)(above) is the first to intern overseas, at Vignamato winery and vineyard in Marche, Italy, while Ethan Baker (below) is the first to head to the Pacific Northwest. He’ll spend his summer at Winemakers, LLC, a vineyard management company in Washington’s Yakima Valley.

Worldwide, the wine industry traces its history back hundreds of years, so those are impressive placements for students from a program that just began in 2010. Viticulture is the newest plant science certificate option offered by Michigan State University at NMC’s University Center. About 28 students are now enrolled, simultaneously pursing an associate’s degree from NMC and an MSU viticulture certificate.

Berry and Baker will complete their internships while on hiatus from their jobs in the regional wine industry, at Brys Estate and 45 North, respectively. The latter is named for the 45th parallel of latitude, which makes both northwest Michigan and Washington suited to grow wine grapes. 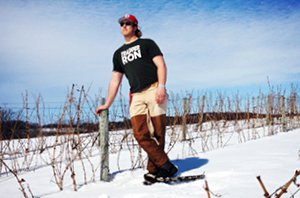 “I chose Washington because, parallel-wise, it’s very similar to Michigan,” Baker said. Yet the industry there operates on a completely different scale. Winemakers LLC manages about 1,200 acres of vineyards — equivalent to almost half the wine grape acreage in the entire state of Michigan.

Berry, 25, is equally enthusiastic, even though he doesn’t speak much Italian.

Both students will return to Traverse City in August. Baker plans to graduate from the viticulture program this December and Berry in May 2016. 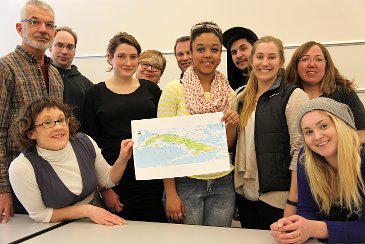 A contingent of NMC students, faculty and staff who depart for Cuba Friday are the leading edge of a new distinction for the college: more study abroad students and destinations than any other Michigan community college.

The Cuba experience is among seven planned study abroad experiences this year. About 80 students from a dozen programs will travel to six different countries, including Cuba, South Africa (also during spring break), Brazil (two trips), Italy, Russia and Costa Rica. According to a survey by NMC’s International Services & Service Learning office, that’s more than any other community college in the state.

Jim Bensley directs that office and also teaches a World Cultures class. He chose Cuba as a destination before President Obama announced a plan to thaw relations with the Communist nation last December. With greater economic development imminent, experiences on the island isolated for half a century becomes even more valuable now.

“It’s rare U.S. residents ever get the chance to visit Cuba,” he said. “With Cuba so inextricably linked to the past, there is a genuine uniqueness that won’t always be as apparent as it is today.”

Visual communications student Desiree Morgan is looking forward to that culture shock. She’s never traveled further than Canada, but had an interest in studying abroad. VisComm students are planning to film a documentary during the trip, which counts as academic credit.

Michael Meteer initially signed up by accident, selecting a course code that included the Cuba experience instead of one that did not. But the psychology student is happy with how things turned out.

“I’m most looking forward to the stories I’m going to come back with,” he said.

An increased emphasis on study abroad is part of the college’s strategic direction to ensure that NMC learners are prepared for success in a global society and economy. Next year, Bensley is planning eight student study abroad trips to several new destinations, including Guatemala, Ecuador, Greece and possibly Ethiopia. 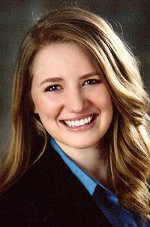 When the National Cherry Queen is crowned next month, Hannah Beaudry will be hoping the luck of the pine tree is on her side.

The NMC student is one of four finalists vying for the 2015 crown. If she wins, Beaudry, 19, will become the fifth queen within the past decade with NMC connections.

“Being able to have a college experience in beautiful Traverse City, Michigan, is such a blessing to me. Hopefully there’s a lucky charm with NMC and cherry queen, but who knows,” said Beaudry, a 2013 Elk Rapids High School graduate who is studying elementary education.

She’ll finish her NMC classes in December and then go on to complete her bachelor’s through Central Michigan University at the University Center.

The Cherry Queen scholarship would cover the remainder of her tuition costs, she said.

“It would be life-changing to earn that scholarship and graduate college debt-free,” she said.

“He made us think in such an amazing way. He really focused on critical thinking,” she said. “The way he lectures is like he’s telling a story, and it just made history so interesting. And I did not love history before that.”

On July 10, Beaudry will hope to make National Cherry Festival history, walking away with the crown first awarded in 1925.