Hannah Beard and Jessi Martin (click for high-resolution version)NMC’s aviation program will get a lofty showcase before a national audience this summer when a pair of student pilots fly across North America in the Air Race Classic, the oldest air race of its kind, and exclusively for female pilots.

Ninety years after legendary aviator Amelia Earhart made cross-country racing popular, Team Hawk Owls — Hannah Beard of Interlochen (left) and Jessi Martin of Maple City (right) — will take off from Jackson, Tenn. on June 18 in an NMC Cessna. The 2,500 mile trip is a race against the clock broken into nine legs. They expect to land in Welland, Ontario, by June 21. 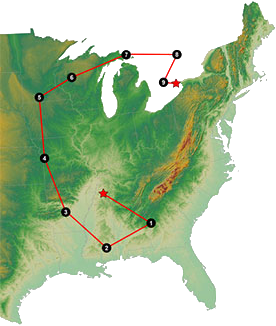 Entering the Air Race Classic is the latest example of how women at NMC are making significant strides in what has long been a male-dominated field. While only four percent of U.S. airline pilots are female, nearly 20 percent of current NMC aviation students are now women. The college is now home to a chapter of Women in Aviation International, which allows them to network and support each other.

“She met all the requirements of the certificate much quicker than any other student we’ve seen in recent years,” Bloye said.

He said competing in the Air Race Classic will drawn more awareness to NMC’s aviation program. Only one other community college has entered. Among the 15 academic teams are mostly large universities including Western Michigan University, Purdue and Ohio State.

“This race will put NMC and our pilots on the national stage with some of the best aviators in the world,” he said. “This is an exciting opportunity to not only inspire the next generation of NMC students, but to give Hannah and Jessi a chance to expand their envelope of experience.”

Their plane’s tail number — N157KC — honors former flight instructor, Kevin Copeland, who passed away in a motorcycle accident in 2017. An NMC flight instructor, Victoria Gann, will be racing as part of another team. Air Race Classic pilots range from ages 17 to 90.

“We look forward to seeing Hannah and Jessi cross the finish line. This will be a huge accomplishment that will help to solidify interest of future NMC race teams,” Bloye said.

NMC is seeking sponsors to help underwrite the $10,000 cost to compete, which includes fuel, transportation and lodging. Contact Paris Morse at the NMC Foundation, pmorse@nmc.edu, for more information.

Follow Beard and Martin’s progress at the NMC Aviation Facebook page. They expect an NMC cheering section may show up at the race’s seventh stop, in Sault Ste. Marie, Ontario.